On Demonstrations And What's To Be Done

[A] simple demonstration in Washington DC is ineffective. The MSM downplay it, and everyone else ignores it.

It also seems that voting and writing to representatives are also ineffective. They are no longer listening, and in most districts have safe seats, so they are not very afraid of being thrown out of office. A Congressional incumbent has a very good chance of remaining in office as long as he or she wishes.

1) Easy: Withdraw our consent. Stop voting. Stop helping them pretend that they represent us. Volunteer nothing, just do what is absolutely required. Get as many people as possible to stop participating in the political system. Then we wait for the system to collapse due to lack of support. The problem is that the system may not collapse for a long time. Even if effective, this approach could take decades.

2) Much harder: Apply the program of Gandhi, “Satyagraha” or “Holding on to truth”, that gained freedom for India from the British Empire. We would take dissent to the level of breaking the law. This takes enormous courage and dedication as we have to be willing to be put in jail not once, but many times. We have to be willing to suffer injury. And, very important, we _must_ have truth on our side. If so, then, in the words of Gandhi, “First they ignore you, then they laugh at you, then they fight you, then you win.”

Many may say that we are not yet at the point of the people of India under the British Raj. But, it seems we are not far off. They were not citizens, and could not vote, and their protests were ignored.

So, if our votes are ineffective, and our protests are ignored, are we much farther behind? Does being a US citizen mean much of anything any more?

3) Much, much, harder: Secede. The program under 2) can be applied with a small group of people, as long as they have popular support. Secession requires a large organization, and is fraught will difficulties. We have to find or create a suitable political subdivision, and we have to get most of the people within it to adopt our program to create a separate nation-state. Then, we have to try to execute a separation in the face of certain resistance up to the level of civil war. This has been done, of course, in our own “Revolution” 200+ years ago, and more recently in other parts of the world, typically in places were there is a ethnic, linguistic and/or historic basis for a new nation-state. In my view, the situation here is not yet to the point that most people would consider this very serious undertaking justified, even though the taxes and regulations and other invasions of liberty we face today are increasingly heavier that those our ancestors rebelled against in the 1770’s.

So there you are, take your pick, or suggest something else.

Fifty [two] years ago, Harry Truman replaced the old republic with a national-security state whose sole purpose is to wage perpetual wars, hot, cold, and tepid. Republican senator Arthur Vandenberg told Truman that he could have his militarized economy only IF he first "scared the hell out of the American people" that the Russians were coming. Truman obliged. The perpetual war began. Representative government of, by, and for the people is now a faded memory. Only corporate America enjoys representation by the Congress and presidents that it pays for in an arrangement where no one is entirely accountable because those who have bought the government also own the media. Now, with the revolt of the Praetorian Guard at the Pentagon, we are entering a new and dangerous phase. Although we regularly stigmatize other societies as rogue states, we ourselves have become the largest rogue state of all. We honor no treaties. We spurn international courts. We strike unilaterally wherever we choose. We give orders to the United Nations but do not pay our dues...we bomb, invade, subvert other states. Although We the People of the United States are the sole source of legitimate authority in this land, we are no longer represented in Congress Assembled. Our Congress has been hijacked by corporate America and its enforcer, the imperial military machine..." ~Gore Vidal.

Links to this post
Labels: Gore Vidal, the State

In following Bush, Obama was given the opportunity either to restore the rule of law and the balance of powers or to firmly establish in place what were otherwise aberrant abuses of power. Thus far, President Obama has, in all the areas mentioned above, chosen the latter course. Everything described, from the continuation of crimes to the efforts to hide them away, from the corruption of corporate power to the assertion of the executive power to legislate, is Obama's presidency in its first seven months.

Which doesn't mean there aren't differences in the two moments. For one thing, Democrats have now joined Republicans in approving expanded presidential powers and even--in the case of wars, military strikes, lawless detention and rendition, warrantless spying, and the obstruction of justice--presidential crimes. ~David Swanson

If You Believe In The Right To Keep And Bear Arms

but this picture bothers you... 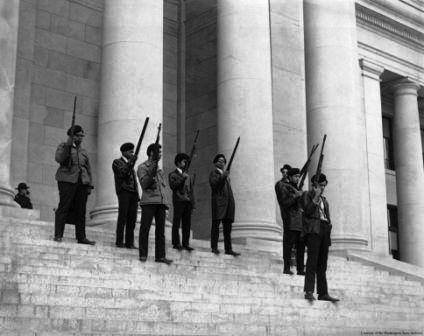 As I've been saying for decades, there is enormous anger simmering just below the surface of America's Productive Class. Year after year, decade after decade, century after century, they have labored hard to supply everything necessary and good in our society—from diesel fuel to lemon meringue pie, from the wheels that get us from one place to another, to the homes in which we find our refuge and comfort—only to have the rewards of their labor snatched away by rapacious parasites intent on controlling every moment and aspect of their lives.

Yet it is they, the Productive Class, who are the first to be blamed, by elements of the Non-Productive Class who couldn't tell a cotter pin from cottage cheese, for everything, real and imagined, that is said to be wrong with that society, from bad taste in color, cars, and clothing, to air pollution, depleted ozone, and global warming.

To the average politician, newspaper columnist, hairsprayed TV commentator, or Hollywood airhead, suburbia is a kind of despicable, disgusting, fetid swamp to be crawled out of, rather than as close to Utopia as humankind has ever come, the locus of all the wishes, hopes, and aspirations of a people whose only wish is to be left the hell alone.

And all these idiots can think of—congressthings and others of the so-called "dominant culture" who believe they own us—is how to suppress that anger for another year, another decade, another century. They desperately want to deny that their opposition is significant and serious. They want to dismiss it as right-wing racism and childish ingratitude. It would never occur to them to consider what that anger might be about, or that it might be justified. They simply want it managed. It's probably too late for that, but they'll be the last to know.