Be Careful What You Wish For

I have to admit that I've gotten caught up in singing the praises of all the "patriot" sheriffs popping up lately.

One of my favorite bloggers and liberty watchdogs has posted on the topic and I have to give him his props for a splash of cold water in my face.

“I will not enforce an unconstitutional law against any citizen of Smith County,” insisted Sheriff Larry Smith. The sheriff wants his constituents to believe that he would refuse to participate in a federally mandated gun grab, or permit one to be carried out by federal officials within his jurisdiction. Yet ten days before Smith offered that assurance, his office had taken part in an early-morning SWAT rampage throughout East Texas in which 73 warrants were served as part of the federal government’s patently unconstitutional war on drugs. 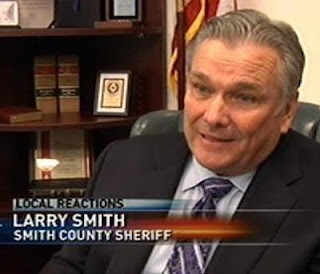 During a December 2011 campaign debate, Smith said that he wanted to “invest more resources” – that is, redirect wealth plundered from the productive – into a “Drug Task Force,” and insisted that under his administration the Sheriff’s Office would embrace a “Task Force mentality” in dealing with law enforcement issues.
The problem with the mindset Sheriff Smith was extoling should become obvious once it’s understood that the German term for “task force” is einsatzgruppe. By their actions many multi-jurisdictional task forces in contemporary America are increasingly faithful to their historic pedigree.
Smith’s devotion to narcotics task forces might be the residue of his early law enforcement career, which included two years as a special agent for the Drug Enforcement Administration – an agency that could be considered the mentally deficient stepchild of the CIA, which is the world’s largest narcotics syndicate. 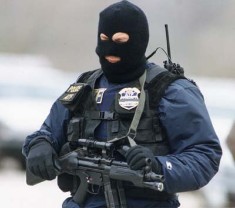 Twenty years ago, an ATF einsatzgruppe launched a murderous raid against an isolated religious group at Mt. Carmel outside Waco. The warrant they were enforcing was clotted with falsehoods. The investigation that produced it was haphazard. Its target, Vernon Howell -- aka David Koresh -- was suspected of trivial violations of federal firearms regulations, and had indicated his eagerness to cooperate with ATF investigators to clear the record.
If an arrest were to be carried out – and one was neither necessary, nor justified – it could have been performed during one of Koresh’s frequent solitary jogging expeditions, or one of his routine visits to town. Instead, the ATF – seeking a dramatic, high-profile enforcement action to generate headlines for the scandal-plagued agency – staged a paramilitary assault on the religious sanctuary. They did so even though the raiders had lost the element of surprise, and when they arrived at Mt. Carmel they opened fire on the building despite the fact that an unarmed Koresh had confronted the stormtroopers with his hands up, pleading for them not to shoot.
Four ATF agents were killed during that Sunday morning raid. Their deaths were utterly unnecessary, and entirely well-deserved: They were attempting to murder innocent people, and the would-be victims acted within their rights in using deadly force to defend their homes against that assault. The criminal clique that had sent the ATF to attack the Davidians sent a larger contingent to lay siege to their residence, and eventually arranged for the holocaust that annihilated 76 people, including seventeen small children. 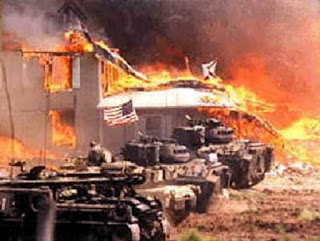 Like most gun owners in Eastern Texas, Smith can remember where he was the morning of April 19, 1993, when the Mt. Carmel refuge went up in flames. He was on the scene as an agent of the ATF, which he had joined in 1989. Smith believes that the initial ATF raid on the Davidians was justified, and that the entire operation was at least a partial success. It’s doubtful that his assessment is shared by many gun owners in his jurisdiction.